English:
Our special guest and festival adviser KSENIA GAPCHENKO presents two Russian documentaries that have extensively been shown at IDFA and other major festivals. MOM by Lidia Sheinin, and SHROVE DAY (=fat Tuesday) by Dina Barinova. You could maybe call style in the films slow-cinema, not a daily experience for us, but for sure a compelling view on Russian family life.

Khachapuri Kino Club an evening with (short) films after sharing a posh Georgian diner.
Filmmaker Pieter Jan Smit loves good food and is programming. Multi artist Nino loves to cook. A special guest is invited to join the company, present his or her film and talk about it. 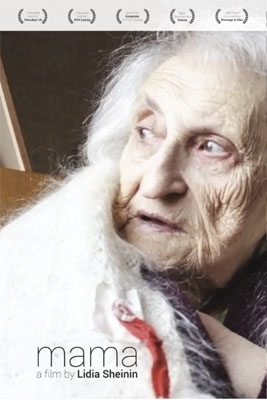 Lidiya Sheynina points her calm and distant camera at her mother’s body and face, often angled from below. Over the years, the mother has evolved the physiognomy of a turtle plodding along comfortably. Life is hard, the flat is cramped, but she makes the best of it – on and on. She has taken care of her aged mother for decades, the grey-haired, graceful Grande dame of this student film treasure, who sometimes exercises (jumping jack in a wheelchair), sometimes calls old friends (if they haven’t died yet), sometimes does the dishes (even the Teflon frying pans she’s not supposed to) but usually only sits and eats, or drinks from a beautiful old cup that has “babushka” written on it.

The grandmother, who has forgotten how old she is (“What? 96? Impossible.”), that she has had no husband for the past 17 years (“Really?”) and hasn’t left the flat in 20 years (“That’s precisely why I’d like to go out again.”), has turned into a child, the daughter into a mama. The radio talks of the wonderful independence of old age; life is different. Together every day and every night. And yet Mama happily sways back and forth to the morning music and looks out of the window with her mother. Waiting for spring. Such tender metaphors turn “Mama”, a film of small gestures, into great cinema. Barbara Wurm

Two men of a certain age, clearly brothers, inch their way through the room. They are singing. At least it sounds like they are trying to, as their monotone voices occasionally rise and fall. During their song, they stare apathetically into space without seeing a thing. Alyosha and Petya are blind, and they were born this way. In the next shot, we meet their sister Shura. Dressed warmly to beat the cold, she makes her way down a typical Russian street: gray, abandoned and full of holes. Like her brothers, she inches along more than walks, and every time a car passes by, she stops dead in her tracks along the side of the road.

When she goes into a store to buy groceries, we realize that she too is blind. Since the death of their parents and her older bother, Shura has been caring for Alyosha and Petya. This family portrait sketches one day in their life, and sometimes it can feel voyeuristic. As if we are spying in through an open window, because after all, they can’t see us. This sensation only increases by virtue of the camerawork, which has every shot being taken from a fixed camera angle, making every action in the film feel even slower.

Februari in Steiger 22
Next